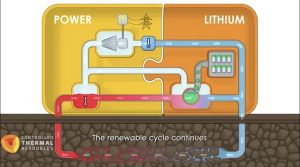 The Imperial Irrigation District Board of Directors wants to tie all the loose ends in regards to the lithium tax that will come in from the extraction.

IID Board President James Hanks requested this item to be placed on the agenda. California Governor Gavin Newsom a bill that creates a tax on lithium extraction on a per metric ton basis, establishes a revenue sharing model (80 percent distributed to local governments in Imperial County and 20 percent to fund Salton Sea-related work by the Natural Resources Agency), calls for a study to be completed by December 2023 that analyzes replacing volume-based tax with an equivalent tax based on gross receipts, and makes the statutory changes to Lithium Valley.

Hanks requested a letter be sent to the Department of Tax and Fee Administration to request mineral rights holders be consulted as part of the study they are trying to complete under SB 215.

“We want to make sure we doing our fiduciary duty for our residents,” Hanks said at the meeting.

The IID Board also considered sending a letter to the County of Imperial to ask for specific details on how much of that lithium tax revenue would be going to the communities of Calipatria and Niland but decided to postpone that action for the moment.

On June 29, the governor of California and legislative leadership reached an agreement on the outstanding state budget proposals. The legislature published the contents of the newly negotiated Senate Bill 178 and the Budget Act of 2022 along with accompanying trailer bills that are expected to be heard in committee and voted this week. One of the budget trailer bills is AB 207-Lithium Extraction Excise Tax which is a priority for the IID.

Among the provisions of the bill it says that starting January 1, 2023, any person that extracts lithium from geothermal fluid, spodumene, rock, minerals, clay, or any other naturally occurring substance in the state will pay a lithium extraction excise tax upon each metric ton of extracted lithium carbonate equivalent in the following amounts:

The bill will provide the tax in place of all county, municipal, or district taxes on lithium extraction or lithium storage, except as provided. The bill would require that the tax revenues, fewer refunds, and reimbursement to the department for its costs associated with the administration and collection of the tax, be deposited into the Lithium Extraction Excise Fund, a continuously appropriated fund established by the bill.

The bill would require 80 percent of the monies in the fund to counties in proportion to the amounts of the taxes, interests, penalties, and other amounts collected for lithium extraction within each county and to deposit 20 percent of the monies into the fund into a sub-account within the Salton Sea Restoration Fund and to benefit the community benefit projects for the communities impacted by the Salton Sea.

The bill would require the Department of Finance to prepare a study that analyzes the implementation of gross receipts tax on the extraction of lithium, on or before Dec. 31, 2023, according to information provided by IID.