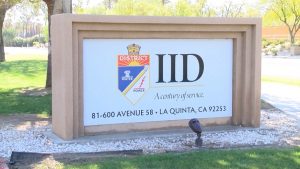 The Imperial Irrigation District Board of Directors is close to establishing a new energy commission in the Coachella Valley as they reviewed the draft bylaws at their July 6th meeting.

This was a follow to a project introduced by IID Director J.B. Hamby to create an energy commission that will represent the ratepayers of the Coachella Valley and thereby ending legislation that tries to interfere with IID governance.

The focus of the commission will be to study the implications for energy service in the Coachella Valley portion of the IID service territory including consideration of strategic choices for service after the 2033 expiration of the Agreement of Compromise of 1934. The 1934 agreement between Coachella Valley Water District and the IID included a 100-year power rights lease, which will terminate in 2033.

“I have had the opportunity to meet with nearly all the cities and tribes of the Coachella Valley and county officials over the past several weeks to talk about the Coachella Valley Energy Commission,” Director Hamby told Beyond Borders Gazette on July 6. “The response has been universally positive, and the only constructive criticism has been requested for additional seats on the Commission, which I think shows the interest our customers have in the Commission.”

Director Alex Cardenas gave some of his concerns regarding the bylaws that included the lack of participation of the tribals and said that the bylaws were leaked to some stakeholders before being vetted by the IID board.

“We need to look at how we are going to fund this commission. I don’t agree on budgeting this commission the way it’s proposed,” Cardenas said and recommended more time to review the bylaws.

Director Javier Gonzalez said he would prefer to leave Coachella since it’s a power grab by the politicians over there.

“They are bitting the hand they feed them,” Gonzalez said. “They already have 10 members in our energy commission and now we will give them more.”

The Commission’s membership will include independently appointed members from Coachella Valley together with a like number of IID representatives, including each member of the IID Board of Directors. While the initial term of the Commission shall be one year, extensions are anticipated to meet the complicated nature of the problems facing the ratepayers in IID’s electrical service territory.

The commission will consist of 14 commissioners, all of who shall have equal voting privileges. The commission shall include the five IID directors and one member appointed by the cities of Indio, Coachella, La Quinta, Cove Community Services, Coachella Valley Tribal Nations, Riverside County, Imperial County, and two at-large commissioners.

The final form of the bylaws, including any changes that result from the meeting of July 6, 2021, will be placed on the action agenda for the regular board meeting to be held in La Quinta on July 13.

According to the draft recommendations, the Commission will provide the link between existing service and governance as provided in the agreement of compromise and the permanent service and governance option formed collaboratively and cooperatively between the IID and Coachella Valley stakeholders represented through the commission.

In the long-term, the commission shall study and develop a strategic plan for energy service and governance in the Coachella Valley at the expiration of the 99-year lease provision of the Agreement of Compromise. Any long-term study performed by the Commission shall include for each proposed option an examination of the implications to the IID Balancing Authority, and analysis of issues regarding representation by and for ratepayers, an estimated cost to provide service under each option with special focus on the impact to residential and low-income ratepayers, and determination whether any option may require an amendment to existing state law or the agreement of compromise.

The Commission shall produce an annual progress report summarizing the Commission’s activities for that year, by July 1 annually. By July 1, 2025, the commission shall publish a Coachella Valley Energy Service and Governance Plan outlining the recommended long-term option to be implemented after the expiration of the 99-year lease in 2033. The plan shall be updated on an annual basis for the years 2026 through 2032 and shall be included in the annual progress report.