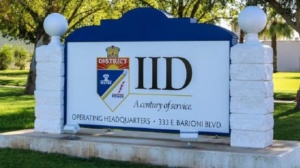 The IID Board of Directors renewed the annual membership to the Salton Sea Authority at their regular meeting held on May 4th by a vote of 3-0 having director JB Hamby abstaining.

The Salton Sea Authority is a joint powers authority created in 1993 by the Imperial Irrigation District, the Coachella Valley Water District, Imperial County, and the County of Riverside to advocate collectively on behalf of the Salton Sea to ensure its continued beneficial uses.

These include its primary purpose as a depository for agricultural drainage, storm-water and wastewater flows, and the protection of endangered species, fisheries, water flow, and recreation. Some years later, the Torres Martinez Desert Cahuilla Indian Tribe also joined the SSA, but it holds a single seat on the JPA board while the other member agencies each have two positions. Directors Alex Cardenas and Norma Galindo serve as the IID representatives on the Salton Sea Authority.

IID’s membership fees have increased over time, with IID’s membership contribution increasing from $35,000 to $60,000 from 2010 to 2012 and then more than doubling in 2013 to a $150,000 contribution that has remained in place until last year. For the Fiscal Year 2020-2021, the SSA membership fee was reduced ten percent to $135,000 due to the financial uncertainties member agencies were facing because of the COVID pandemic, combined with the state’s increased efforts to implement its Salton Sea Management Plan and an award of approximately $19 million in Proposition 68 funding to the SSA for the north lake demonstration project.

At the SSA’s March 25th meeting and in a letter to IID dated April 2nd, the SSA executive director presented a draft FY 21-22 budget that anticipates a return to agency membership fees of $150,000 per year (with the Torres Martinez contributing $10,000). The documentation notes that in the current FY 20-21, the SSA has not realized other budgeted revenues and has experienced difficulty in rigidly managing expenses in a COVID workplace, resulting in the depletion of most of the SSA’s Reserves.

The fiscal year budget proposes a five percent increase for salary expenses although the budget does not anticipate any increases in staff salaries. The budget does not include two new positions, a public relations director and an intern, which will be funded by ex officio dues, sponsorships, or other non-membership agency revenues. Budget increases are also provided for federal and state advocacy efforts, public relations support, and grant administration. While grant revenues are significantly reduced in this budget proposal, these funds are associated with expenditures that would similarly be reduced if the funding were not made available.

In other related items, the Salton Sea Authority submitted a draft letter to IID on April 28, 2021, seeking the district’s advocacy for federal representatives to request an FY2022 Energy and Water Appropriations for U.S. Army Corp of Engineers funding to initiate a feasibility study of the Salton Sea Perimeter Lake.

This ACOE effort typically involves a process that is driven by the “3x3x3 rule”, in which a multidisciplinary team conducts its analysis within a three-year schedule, at a cost of no more than $3 million and involving three levels of ACOE review (district, division, and headquarters). Coordination with state and federal agencies is initiated in the scoping process – and will be a critical component of any study given California’s legislative responsibility for Salton Sea restoration and their ongoing development of the Salton Sea Management Plan.

While IID has supported the SSA’s long-range coordinated planning efforts, it has historically raised concerns about the hydrologic aspects of a perimeter lake – and in particular the volumetric and water quality needs of the project and the additional level of playa exposure (if any) associated with this alternative.

Additionally, IID is uncertain as to how the 2016 SSA perimeter lake feasibility study drafted by Tetra Tech and the long-term plan being developed by the California Natural Resources Agency (and due no later than December 31, 2022, as per the 2017 State Water Resources Control Board’s stipulated water order) might overlap, conflict or be coordinated. Federal monies mustn’t be used to duplicate previous efforts, but instead work to develop a common, integrated path forward.

IID has developed a draft letter supporting this federal appropriations request based on the SSA request. The letter of support was approved by the board of directors.