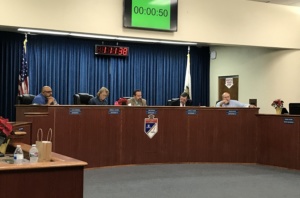 The Imperial Irrigation District will work with the Bureau of Reclamations to resolve the outstanding 2010 Salton Sea mitigation water pre-delivery as decided by the board of directors at their regular meeting held Dec. 3.

The district is hoping that the 2010 Salton Sea pre-delivery issue will result in the reimbursement of approximately $6.3 million in funding to IID from the Quantification Settlement Agreement Joint Powers Authority for the balance of mitigation water funding from 2011 to 2012 that has not been billed. The district is taking this action in order to focus its efforts on future Colorado River negations related to the expiration of the 2007 Interim Guidelines at the end of 2025 and to develop the appropriate documentation to be brought back to the board for final approval.

“To this day, IID has been steadfast in its resolve and commitment to the Salton Sea as evidenced at IID’s last board meeting by the adoption of a resolution affirming the district’s commitment to a smaller but sustainable Salton Sea and establishing parameters for IID’s position in future Colorado River negotiations,” said General Manager Enrique Martinez. “Yet, this one issue of the pre-delivery to the Salton Sea has been a continuing source of concern for Reclamation and many other Colorado River contractors.”

In 2010, IID pre-delivered 46,546-acre feet of its consumptive use entitlement water to the Salton Sea to satisfy mitigation obligation for 2011 and the first half of 2012. This was necessary because the Sacramento Superior Court has invalidated the Quantification Settlement Agreement. As a result, there was a great deal of uncertainty as to what would happen to the QSA. The pre-delivery enabled IID to meet its permit requirements in support of the QSA transfers, without creating the financial risks associated with fallowing for mitigation that could have come to fruition if the QSA were to be unwound.

IID asserted at the same time that the consumptive use of the Colorado River water for QSA environmental mitigation purposes was an appropriate and prudent action. However, the Bureau of Reclamation and many other Colorado River contractors objected on the basis that they did not want to see the development of an IID water right for the Salton Sea.

There were many exchanges regarding this issue over the three years following the action. In May 2013, Reclamation agreed that the matter could be resolved if IID would submit a definitive set of actions and timeline to offset the 2010 pre-delivery of mitigation water to the Sea. The next month, the general manager responded, reiterating IID’s continued belief of the legality of its actions and the district’s intent to do what it believes was necessary, appropriate and lawful to protect the health of the Salton Sea and the region and to safeguard the district’s water rights.