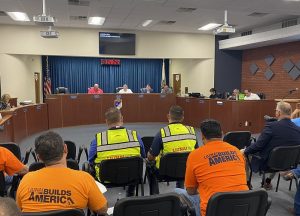 The Imperial Irrigation District Board of Directors heard a presentation about options on how to pay off their membership with the Joint Powers Agreement that oversees the Quantification Settlement Agreement, the landmark agreement that was signed two decades ago.

The QSA JPA consists of representatives from the IID, Coachella Valley Water District, San Diego County Water Authority, and the California Department of Fish and Wildlife, with the sole purpose of managing environmental mitigation contributions through the collection, holding, investing, and disbursement of funds to implementing agencies for all environmental mitigation requirement costs.

The three water agency funding commitments are capped at $133 million (in 2003 dollars), and mitigation expenses over this amount are, by contract and legislation, the responsibility of the state of California Each agency’s annual contributions are outlined in the Environmental Cost Sharing, Funding, and Habitat Conservation Plan Development Agreement that is also part of the QSA Agreements; the annual scheduled contributions collectively results in total maximum contributions of $44.1 million from IID, $36.7 million from the CVWD, and the $52.2. Million from SDCWA.

On two prior occasions (2007 and 2015), the water agencies made advance payments to ensure adequate funding was available to meet anticipated mitigation expenses and to avoid debt financing, and the recent expenditure planning forecast anticipates another potential QSA JPA funding shortfall as soon as the Fiscal Year 2026. As per the terms of the JPA Agreement, advanced funding contributions are discounted to 2003 dollars using a six percent interest rate, compounded annually, discounted factor. IID has reviewed its remaining payment schedule balance of $71,121,693 and considered its water transfer budget and reserve account, to identify early pay-off scenarios that will address both the projected shortfall and provide financial cost savings to IID. Staff will provide an overview of its recommendation for a proposed 2022 payoff and the associated cost savings.

For any early pay-off scenario, IID’s $44.1 million present-value funding commitment to the QSA JPA remains capped. With a 2022 payoff of $50,626,018, IID’s 2022 annual contribution will increase by $47,316,778 however there will be an appropriate $24 million total cost savings in future payments due to the six percent, compounded annually, discount factor.