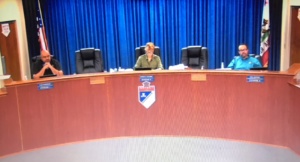 The Imperial Irrigation District Board of Directors accepted the Salton Sea 2019-2020 proactive dust control plan at the April 21st meeting.

The board heard a presentation about the Salton Sea Plan by Water Department Manager, Tina Shields, who gave the board an overview of the plan and what will come next.

The Quantification Settlement Agreement water transfer permits require IID to develop and implement an air quality mitigation plan for dust control on the Salton Sea playa. In July 2016, the Salton Sea Air Quality Mitigation Program was accepted by the IID Board of Directors to provide a comprehensive, science-based approach for this mitigation requirement. The program includes steps to characterize the emissions potential of the exposed play as the Salton Sea shoreline recedes and provide options to proactively prevent significant dust emissions.

Since 2003, when the Quantification Settlement Agreement water transfer program was initiated, 23,910 acres of Salton Sea playa that were previously underwater have been exposed due to the shoreline receding as a result of reduced inflows.

IID has implemented over 2,000 acres of air quality mitigation projects on these lands, in both the Imperial and Coachella Valleys, and has identified approximately 7,000 acres of playa for additional dust mitigation project design and implementation within the next three years. The priority playa area identified in this plan account for 54 percent of the total yearly emissions.

Some of these recommended projects and acreage include joint efforts between the IID and the California Natural Resources Agency and its Department of Water Resources and will be implemented in a series over the next three years, including up to 3,600 acres of surface roughening. Many areas of the playa are also naturally vegetated, providing dust control benefits for approximately 5,800 acres.

Funding for these reports and related data collection efforts associated with IID’s air quality mitigation requirements are reimbursed by the QSA Joint Power Authority and have not cost to the Water Department.