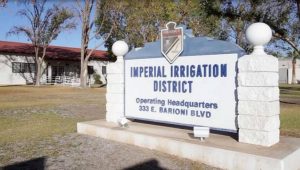 The Imperial Irrigation District Board approved a settlement with the California Independent System Operators regarding the S-Line Upgrade Project.

The S-Line in its current configuration is an 18.1 mile, 230 kV single circuit wood pole transmission line running from the IID-owned El Centro switching station to the joint owned San Diego Gas & Electric Company and IID Imperial Valley Substation. The S-Line upgrade will provide benefits by removing a limitation to increased delivery from the Imperial area, in particular. The funding and construction of the S-Line upgrade is a key element to a settlement agreement between the CAISO and IID.

Implementation and settlement terms required negotiation of technical agreements within the framework of the CAISO tariff. IID worked with CAISO and Citizens and their various counsel and consultants on an agreement that are intended to fulfill IID’s and CAISO’s obligations under the settlement agreement.

The upgrade will have no impact on ownership or operation of the S-Line; the line will remain under IID ownership within the IID balancing authority area. Citizens will lease transfer capability in the upgraded transmission line and the right to schedule on the leased transfer capability will be turned over to CAISO for use.

Citizens will pay to IID up to a maximum of $40 million toward the upgrade of the 230kV transmission line. Citizens will file an application for cost recovery to be collected through the CAISO transmission access charge, and a petition for rate incentive associated with that cost recovery. Any cost that exceeded the $40 million will be borne by IID per the settlement. Separate from the S-Line upgrade but part of the settlement, IID will be required to upgrade the Bank 5 Transformers at the El Centro Switching Station at its own cost and expense. That upgrade will be brought to the board as a separate project in the future.