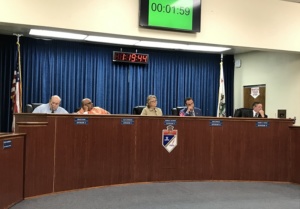 The Imperial Irrigation District Board of Directors voted to approve an agreement with the company Terre Ferme at their regular meeting on Jan.  21.

In what is considered a project that will bring an economic boost to the north end of the Imperial County in the years to come, the board approved this item at their meeting after being postponed last month.

This item was discussed at the Dec. 23 meetings but they were tabled as a request by Director Alex Cardenas so there could be more information and modifications to this project.

Some of the board members had concerns about this project to which the company decided to address before coming back for final approval. The item was discussed again by the IID Board of Directors were they voted 4-1 to approve the project with Board President Norma Galindo voting against. Galindo said she would vote against it the lack of organized labor working in this project and it’s being done on irrigated land.

Among the supporters of this project were El Centro Mayor Efrain Silva and Brawley Mayor Norma Jauregui who said this project would be beneficial to the Imperial Valley since it will bring economic development to the area that is highly needed.

Terre Ferme LLC made an unsolicited offer to Imperial Irrigation District to purchase approximately 2,880 acres of IID-owned land. The land is located in an unincorporated area of Imperial County near Niland within an area bordered by State Highway 111 to the west, Sinclair Road to the south of Wiest Road to the east. The subject real property is currently being leased by IID under farming leases with local growers.