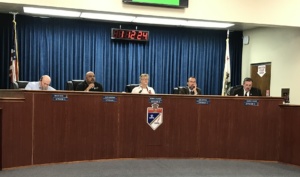 The Imperial Irrigation Board of Directors Approved Funding for the Brown Bag Coalition and Baja Runners through its local entity program at their regular meeting held Feb. 18.

On November 5, 2019, the board authorized a series of final grants totaling $627,000 to 29 entities to close out the mitigation funding commitment; however, one $2,000 grant to the Club Del Los Amigos Senior Club was declined. The board subcommittee recommends these funds be relocated to the Baja Runners to provide funding for equipment and uniforms for the Lions Football Club year-round youth soccer program in the amount of $1,300, and the balance of $700 will go to the Brown Bag Coalition to support the purchase of a portable shower for the homeless.

Brown Bag Coalition co-founder Maribel Padilla said that the group distributes meals to an average of 50 people on a daily basis 7 days a week, 365 days a year.

“In addition, we also provide clothing, shoes, blankets, toiletries, weather-related items and also refer them to agencies that can help guide them to other resources,” Padilla stated in a letter addressed to the Imperial County Supervisors last month who also made a contribution for the purchase of the portable shower trailer in the amount of $2,512.

The shower trailer they are trying to purchase will be the offer the homeless population much-needed showers, especially in the summer months.

IID Board President Normal Galindo said the Brown Bag Coalition is still short on the money amount for the shower trailer but this will help them achieve their goal. The IID Board voted unanimously to approve this local entity donation for Baja Runners and Brown Bag Coalition.

The IID Board of Directors, acting as the Local Entity, functions to authorize grant funding to help offset socioeconomic impacts resulting from land fallowing implemented within the IID water service territory in furtherance of the Quantification Settlement Agreement.

The IID and San Diego County Water Authority water transfer agreements authorized $50 million in local entity mitigation funding, with $30 million provided by the San Diego Water Authority and $20 million by IID. Since 2008, nearly $32 of these monies have been disbursed to farm service providers whose businesses were affected by the fields contracted for fallowing by IID in support of its water transfer programs, fully allocating the monies set aside for those purposes.

Additionally, the Local Entity has committed over $10.3 million to support local non-profit, community organizations and Imperial Valley business endeavors and funded over $6.1 million in larger-scale grants to reopen a local beef processing plant, develop a sugarcane-based ethanol processing plant, assist in the development of an expanded new local food bank facility and assist in a public pool renovation project by the city of Westmorland.