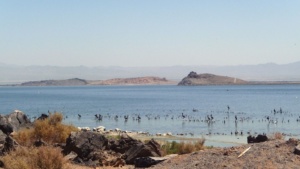 The Imperial Irrigation District Board of Directors approved a contribution of $135,000 to the Salton Sea Authority for the fiscal year 2020-2021 at their August 4th meeting.

The IID board discussed the approval of an annual contribution to the Salton Sea Authority but did so after the board representatives in the SSA board asked for a ten percent reduction in agency contribution from the draft previously presented.

The Salton Sea Authority is a joint powers authority created in 1993 by the Imperial Irrigation District, the Coachella Valley Water District, Imperial County, and the County of Riverside to advocate collectively on behalf of the Salton Sea to ensure its continued beneficial uses.

These include its primary purpose as a depository for agricultural drainage, storm-water and wastewater flows, and the protection of endangered species, fisheries, water flow, and recreation. Some years later, the Torres-Martinez Desert Cahuilla Indian Tribe also joined the SSA, but it holds a single seat on the board while the other member agencies each have two positions. Directors James Hanks and Cardenas serve as the IID representatives in the Salton Sea Authority.

IID’s membership fees have increased over time, with IID’s membership contribution increasing from $35,000 to $60,000 from 2010 to 2012 and then more than doubling in 2013 to a $150,000 contribution that has remained in place since then. At the May 2020 board of directors meeting, at least three member agencies, including IID, expressed concern about the Salton Sea Authority’s agency contribution for this fiscal year in light of the $19 million grant in funding included for the Salton Sea Authority in the state’s budget. The IID is also concern about the current COVID-19 public health emergency impacts on local agency budgets.