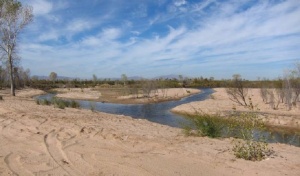 Many interested community members attended a public workshop held at the Imperial Irrigation District boardroom on January 30, to hear about the laws and agreements that govern the Colorado River. The presentation was led by noted water attorney Charles DuMars.

The focus of the workshop was to provide, within the broadest contours, an explanation of the manner in which allocation of Colorado River water has been structured to protect the water rights of the Imperial Valley.

“The relevant question is whether the Law of the River protects the water rights of the IID, its water users and the citizens of the Imperial Valley,” DuMars said.

IID and its water users were recognized for having weathered tremendous political pressure and great sacrifice to bring California into compliance with its obligation to limit the state’s consumption, for implementing water conservation measures over many years and for their key participation in the Quantification Settlement Agreement.

The presentation also highlighted external pressures, such as current drought conditions and urban growth, as areas of potential concern that need to be closely monitored. The IID Board of Directors reiterated its position that it will do everything within its power to protect the Valley’s water rights.

Those who attended the workshop received a copy of the Law of the River Resource Guide that contains copies of important documents including the Colorado River Compact of 1922, California Seven Party Agreement of 1931 and the State’s Water Board Revised Order (Salton Sea) from 2017.