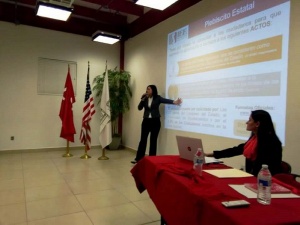 MEXICALI, BC.- With the objective of creating a culture of greater participation in the electoral political life among citizens, the State Electoral Institute of Baja California (IEEBC), continues with awareness activities through the Commission of Citizen Participation and Civic Education.

The Electoral Counselor, Bibiana Maciel López, who heads this commission, reported that so far this year a total of 713 people have been assisted at different information sessions and conferences given at universities, high schools and non-profit associations in the State.

It should be noted that the main sector that has been served is that which comprises young people between 17 and 29 years of age, this is because it is the population that has shown the lowest participation in past electoral processes even though they are 30% of the electoral census, representing an electoral force of 26 million in the country.

Finally, Councilor Maciel said that any university, high school or non-profit organization interested in these talks given in Baja California, can call (686) 556-8476 ext. 1106 or email participacionciudadana@ieebc.mx