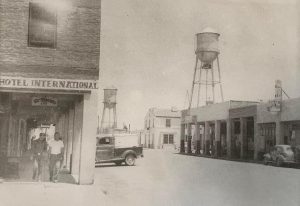 The water tower on First Street has been Calexico’s symbol for decades but due to structural issues, the landmark structure will have to be moved to a new location.

The issue was one of the topics of the Sept. 21st Calexico City Council meeting where the council encourage the City Manager to start looking for a new place to preserve one of the few left historic landmarks in Calexico.

The city owns property at 352 East First Street where the city-owned water tower is situated. In March 2020, the City issued a Request for Proposals for the acquisition of the water tower site and telecommunication leases, and on June 3, 2020, the Council selected the highest bidder, SBA Towers X LLC (SBA),  who proposed to obtain a 55-year easement over the water tower and obtain the assignment of all existing leases in exchange for one-time lump sum payment to the city to receive 70 percent of gross rental revenue for any new tenants added to the water tower.

The replacement faux water tank will be designed to match the existing water tower color scheme and the “Welcome to the City of Calexico” message. Additionally, all antennas, wires, and conduits for the wireless facilities will be placed with the faux water tank to minimize the visual and aesthetic impact of the wireless facilities and appurtenances.

The water tower is no longer used for water storage. However, in the last couple of decades, the City has entered into contracts with various wireless carriers (AT&T, Sprint, T-Mobile, Verizon) and with the Customs and Border Patrol to allow the placement of wireless antennas and equipment on the water tower and the ground beneath the water tower. Collectively, these contracts currently generate approximately $90,000 in annual lease revenues. In 2019, the City discovered a structural defect in one of the support footings of the water tower and made some limited repairs.