Hyperbaric chamber: its promising uses, although NOT approved yet

By: Dr. Elton Gomez, a specialist in regenerative medicine.

It is already known that hyperbaric oxygenation can be very useful for the treatment of wounds, infections, and other health problems that can become serious, such as pressure ulcers, severe anemia, brain abscess, arterial air embolism, with air bubbles in the blood vessels and lungs, burns, carbon monoxide poisoning, sudden deafness and decompression sickness in addition to the devastating diabetic foot which occurs as an infectious and circulatory complication of diabetes mellitus.

But there are other indications that have been used as merely anecdotal treatments but that make us think and guide us about the possible uses that can be given to this technology for the benefit of patients’ health, here are some of them:

CANCER: In combination with the ketogenic diet, hyperbaric oxygen therapy, Dr. Dominic Agostino has managed to slow down and reverse the progression of cancer in patients and experimentally in laboratory animals, a very specific protocol is used, both of diet and hyperbaric oxygenation to achieve these results, but the protocol is perfectly applicable to the population affected by this disease.

JOINTS: Irish researchers based in Dublin have proposed treatment of arthritis, be it this traumatic, inflammatory, or autoimmune origin with hyperbaric oxygen therapy based on the fact that the articular cartilage cells receive their nutrition and oxygenation directly from the synovial fluid, which is produced by the joint capsule and hyperbaric oxygenation increases the amount of oxygen dissolved in it. 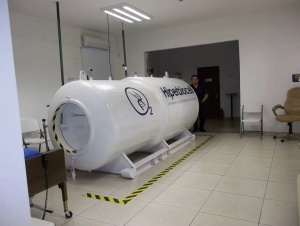 Likewise, oxygenation in a hyperbaric chamber has been used for a long time in the mayo technique, famous for testing novel and unconventional treatments in the patients who take it, for the treatment of arthritis of various origins but especially rheumatoid arthritis, being beneficial in the repair of diseased joints what Inhibiting the progression of joint disease and also delaying the need for surgery to implant joint prostheses.

ANTI-AGING: A group of Israeli scientists has managed to reverse the aging process at the cellular and genetic level using hyperbaric oxygenation, to achieve the extension of DNA telomeres in cells, which are a marker of aging and have been shown as age cells, telomeres are shortening, space between them is left, longer telomeres are related to better cell performance and youth, said Dr. Shai Efrati, professor at the Faculty of Medicine and the School of Neurosciences of Tel Aviv University.

COVID19: Non-Randomized Studies have been used because the main problem of pneumonia secondary to COVID19 is that the oxygen transport chain initially gets interrupted, which is the exchange of oxygen at the alveolar level, causes hypoxia of the cells in the whole organism, which in severe cases leads to multiple organic failures secondary to said hypoxia, therefore hyperbaric oxygenation has been used in some selected cases as adjuvant therapy since it increases the concentration of oxygen to the tissue level, decreasing tissue hypoxia while at the same time improving mitochondrial function and reducing lung parenchymal lesions, observed as ground-glass lesions in X-rays and CT scans of patients.

Despite the evidence, no broad studies have been done to support the indication of the hyperbaric chamber in these situations, therefore much more clinical and experimental research is required in order for these indications to be approved in the future.

As a practitioner of regenerative medicine and hyperbaric oxygenation, I wish it to be so.