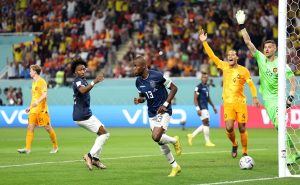 FIFA’s threat of on-field punishment for players pushed World Cup teams to back down and abandon a plan for their captains to wear armbands that were seen as a rebuke to host nation Qatar’s human rights record.

Just hours before the first players with the armbands in support of the “One Love” campaign were to take the field, soccer’s governing body warned they would immediately be shown yellow cards — two of which lead to a player’s expulsion from that game and also the next.

In a joint statement, the football associations of countries planning on wearing the armband said FIFA had threatened to issue yellow cards to any player wearing it.

According to FIFA rules, team equipment must not have any political, religious, or personal slogans, statements, or images, and during FIFA Final Competitions, the captain of each team “must wear the captain’s armband provided by FIFA”.

World Cup organizers have repeatedly said that everyone, no matter their sexual orientation or background, is welcome during the tournament.

That changed the calculus for the seven European teams, which may have expected merely to be fined. The displays are a violation of FIFA rules.

No player had the “One Love” armbands Monday, although England’s Harry Kane wore the FIFA-approved “No Discrimination” armband that was offered as a compromise in the match with Iran.

The OneLove armbands were originally launched in 2020 as part of an inclusiveness campaign by the Royal Dutch Football Association (KNVB).

The KNVB campaign opposes discrimination based on race, skin color, sexual orientation, culture, faith, nationality, gender, age, and “all other forms of discrimination”.

The design features a rainbow flag in the shape of a heart with a number one in the middle, surrounded by the text “One Love” on either side and the words “football connects” in cursive below.