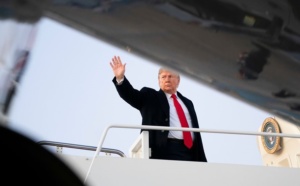 In what becomes the biggest political fight before the presidential election next year, President Donald Trump is facing an impeachment to see if he violated the constitution.

House Speaker Nancy Pelosi made the announcement months ago that she would open an impeachment inquiry, a move that came after a whistleblower’s complaint involved Trump’s alleged efforts to press Ukrainian President Volodymyr Zelensky to dig up dirt on former Vice President Joseph Biden and his son Hunter.

The first public impeachment hearing in more than two decades took place on Nov. 13 as Americans watched the spectacle take place seeing how politicians from both parties argue about this process in front of a nation deeply divided.

The impeachment process is being held right now in Washington D.C. by Congress.  This is taking a good amount of time away from other issues such as a budget spending deal and decide on the fate of the new trade deal with Mexico and Canada.

Meanwhile, President Trump renewed his call to unmask the whistleblower whose complaint sparked the impeachment inquiry. Trump believes that this is a witch-hunt by Democrats that are after him because they will not be able to defeat them in next year’s elections.