Homeless threats to shoot up the mall 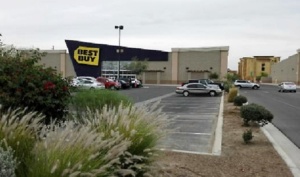 The subject was making threats toward customers and employees that he was going to “shoot up” the Mall. The EC Police said that a reporting party mentioned the subject had something in his hands but they were not sure what it was.

People were seriously shocked with this event, after the recent known shootings in El Paso and Dayton, but the El Centro Police Department responded immediately to the emergency call and resolved the issue.

Rumors started spreading across the borders saying that the person was shooter ready to cause another tragedy, but now in Imperial County.

Beyond Borders Gazette contacted the Imperial Valley mall manager, Alicia Swain and she said there was no threat inside the mall. The individual seemed to be a homeless person who seemed to be out of his mind making threats in the parking lot open area near Best Buy.

The El Centro Police Department reported on their part that officers responded to the area of the IV Mall and began searching for the subject based on descriptions provided by witnesses.  Officers located the subject, later identified as Claudio Salazar (38 of Calexico) near Best Buy.   Salazar continued to be as aggressive with officers as he was with a patron of the mall and refused to cooperate.

Multiple witnesses positively identified Salazar as the suspect who had threated to “shoot up” the IV Mall. Salazar was taken into custody and later booked at the Imperial County Jail for Criminal Threats and Resisting, Delaying or Obstructing a Peace Officer. No weapons were located in Salazar’s possession.

Finally, the El Centro PD affirmed that “the witnesses, in this case, were crucial to them being able to intervene and prevent any further disturbances involving Salazar” and that “in light of recent events in El Paso and Dayton, this is not one of those types of events”.