Homeless Crisis is a Priority for California Governor 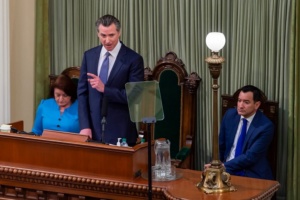 California Governor Gavin Newsom gave his State of the State Address Feb. 19 making the homeless crisis the top priority of his administration.

While Newsom highlighted the strength of California’s economy, the Governor dedicated most of his speech on his action plan to tackle a problem that has plagued California cities and rural communities.

Governor Newsom spoke highly about the current state of the economy in California that, according to him, is still strong.

“More than half of all U.S. venture capital still flows to California companies.

Yes, California today is an enterprising, modernizing, pluralizing, unionizing, the nation-state of opportunity,” he said.

Newsom said that 1 in 7 new jobs created by the U.S. economy since 2010 has been created in California.

“So when you hear the boasts, bleats, and tweets of Washington politicians tripping over themselves to take credit for the economy, remember the real VIPs of America’s GDP—the millions of California workers, investors, and entrepreneurs who are actually producing their own California Dreams,” the Governor said during his speech.

Governor Newsom has taken action in the issue of homelessness in the state. A recent state of emergency declared by the Governor started the work to help people live in affordable housing units.

“The State of California can no longer treat homelessness and housing insecurity as someone else’s problem, buried below other priorities which are easier to win or better suited for soundbites,” Newsom said. “It is our responsibility. And it must be at the top of our agenda.”

The executive order is to reduce street homelessness, reduce barriers for homeless individuals to access health care and other services, and increase housing options for those experiencing homelessness.

“Let’s call it what it is, a disgrace, that the richest state in the richest nation—succeeding across so many sectors—is failing to properly house, heal, and humanely treat so many of its own people.

Every day, the California Dream is dimmed by the wrenching reality of families, children, and seniors living unfed on a concrete bed,” Newsom said.