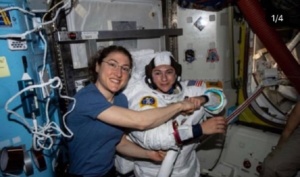 On a historic day for NASA, the world astronautics industry, and for humanity in general, for the first time, two women, Jessica Meir and Christina Koch, made the first space expedition run exclusively by women. They were on the space orbit for 7 hours and 17 minutes, performing a mechanical engineering work mission at the international space station.

This was Jessica Meir, 42, together with Christina Koch, embarked on this memorable event, remembering Svetlana Savitskaya, the Russian astronaut, who became the first woman to orbit outer space during a mission by the Soviet Union, in 1984.

The President of the United States, Donald Trump, congratulated both astronauts, during the live broadcast on different national television channels. President Trump called the astronauts during their spacewalk to thank and applaud them.

Trump said to them: “Congratulations Christina and Jessica on this historic event. This is truly historic, and you’re right now on television all over the world so don’t get nervous.”

The mission began at 7 am on Friday, October 18, where they were on the orbit of the international space station, to install a set of lithium batteries from port 6 of the station, ending with that mission at around 3 pm, in order to return successfully to the interior of the station. Mier and Koch are expected to return back to Earth in the spring of 2020 while completing their research work at the ISS.