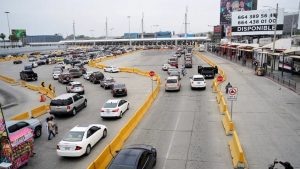 To speed up the international crossing between Mexico and the United States at the border between Tijuana and San Ysidro, the Government of Baja California, together with authorities from both sides of the border, participated in a historic operation to speed up the international crossing, reported the Secretary General of the Government, Catalino Zavala Márquez.

The state official reported that, on the Mexican side, the installation of a vehicular speeding filter is contemplated in the area surrounding the San Ysidro port of entry between November 15 and January 15, 2023.

In the same sense, he indicated that the United States agreed to expand the number of open lanes so that more people can travel to US territory, also assigning more agents from the Customs and Border Protection Office (CBP for its acronym in English).

Regarding the filters in Mexican territory, the president reported that they will integrate the three levels of government to guarantee order and security in the international area, the Municipal Police of Tijuana, the Secretary of Citizen Security of Baja California (SSCBC) will take part and the National Guard.

The filters will also have the support of agents from the National Migration Institute, who are empowered by law to guarantee that the transit of any person, when leaving the national territory, is through regular, safe, and orderly channels.

The operation will be located in the Sentri and Ready Lane lanes and will operate 24 hours a day in three different shifts, with visible signs and duly trained agents for agile reviews and with strict adherence to the human rights law.  In addition, the support of the National Institute of Migration (INM) will be available at all times if its intervention is necessary and the review of the migratory situation of any person is necessary.

“This collaboration will allow us to accelerate vehicular traffic, leaving a positive impact in Tijuana, since faster crossings mean benefits for the economy on both sides of the border, which in turn is the busiest in the world with more than one hundred thousand daily crossings,” he said.

For his part, the head of the SSCBC, General Gilberto Landeros Briseño, reported that there will also be a unit that will facilitate the movement of those transfers of vehicles that present an irregular situation, which will be taken to a special site for analysis and subsequent determination.

For the filters to fulfill the function of speeding up vehicular traffic, the reviews will be random and not generalized.

Frequent users of the Sentri and Ready Lanes of the San Ysidro Port of Entry should wait for a reasonable transition period, during which the authorities of both countries will periodically evaluate the results of the operation to gradually reassign the US agents who are now concentrated on the borderline (yellow caps).