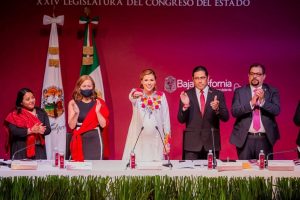 At the stroke of midnight on Nov. 1st, Baja California will enter a new era on different levels: a new administration led by the first female millennial governor in history that many have high expectations due to her promises made during the campaign.

Marina certainly had a meteoric rise in politics but she has many challenges ahead of her due to the inheritance left by the failed government of Jaime Bonilla Valdez who chose not to appear during the oath of office ceremony. Logistics marred the ceremony as the media struggled to get a declaration from local elected officials. The new governor didn’t even give the press a few minutes to talk about issues that are an immediate concern to Baja California citizens.

Two videos played during the ceremony, one that highlighted her political career and the other about her goals and objectives of her administration. One video stated that during her term as Mayor of Mexicali, the city became one of the safest places in the state. However, a recent travel alert by the United States Government said that Mexicali is one of the most dangerous cities due to the increased violence in the Mexicali Valley.

Months before her swearing-in, Marina had a working tour in Sacramento, California with State legislators, San Diego officials, and agencies, met with Temecula Wineries, and California State Departments. Imperial County was not visited by the new governor despite that she developed a close relationship with the county and its cities during the height of the COVID-19 pandemic.

Border issues will be part of her administration during the construction and expansion of ports of entry in California.

“I know great things will come with Marina and we truly hope we can see the international port of entry Jacumba-Jacume become a reality. It’s a project that has been stuck for ten years,” Tecate Mayor Dario Benitez told Beyond Borders Gazette.

Marina del Pilar Ávila, thanked all those present, including the representatives of the three levels of government of California and the United States, thus, reiterated its commitment to continue working continuously to improve the development and quality of life of the inhabitants on both sides of the border, she said.

“Our state is young like its people and that fills us with hope, we must overcome apathy and find participation measures to tackle the causes that concern youth, who represent almost half of the population of our state,” added Governor Ávila Olmeda.

She emphasized the correct performance of public officials. “I will not tolerate corruption or lies, or theft, much less betrayal of our people.  (…) I want to tell all of you that I will be very aware of the behavior of the public servants who accompany me in this responsibility, as soon as there is any sign other than public service education, rest assured that you will be separated from the project”, exclaimed Ávila.

“I see the future with optimism and with great responsibility, I cannot imagine the next few years without reconciliation, without diversity, outside the rule of law, or without respect for one another. We have many challenges and battles to win, in my government, all well-intentioned proposals, talent, and work will be welcomed.”