HEALTH INSPECTIONS WILL CONTINUE IN MEXICALI THIS WEEKEND 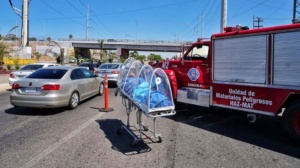 Mexicali, B.C.- As part of the operations, aimed at reducing COVID-19 infections, in this municipality, it was announced that this weekend the health inspections will continue at the entries of Downtown, Mexicali, East port, San Luis Rio Colorado and Los Algodones. During the coordination meeting, led by the Chief Official of the Mexicali City Council, Juan José Pon, it was reported that these operations are carried out for the safety of the residents of the city, and will continue until the contagion curve descends in the capital of the state of Baja California. The municipal official thanked the participation of the National Guard, SEDENA, Fire Department, Municipal Public Safety, Municipal Medical Services, Secretary of the City Council through the Department of Alcohols, the Department of Public Health, which in a joint effort will be present in these sanitary filters starting this Friday 17 and until Sunday, July 19.

He pointed out that the purpose of these actions is not the seizure of intoxicating beverages, but rather to verify that the people who enter the city do so in compliance with all the sanitary measures ordered by the Health Sector, in addition to showing no symptoms of COVID-19, use of face covers and that the visit is to carry out essential activities.

He recalled that in case of manifesting high temperature above normal or presenting any symptoms of the virus, the crew in the car will be referred to a second medical examination to be further evaluated. On the other hand, and to strengthen preventive actions in San Felipe, it was announced that Mexicali Firefighters will assign an ambulance, in support of the port’s medical sector, to take care of COVID-19 patients.

The Senior Officer issued instructions that, throughout the review day, participants will be provided with water, hydrating beverages, and shades are installed for their protection since the forecast indicates that the high temperatures will continue in the region during the weekend.