HARDENING ACTIONS AGAINST ALCOHOLISM IN B.C. 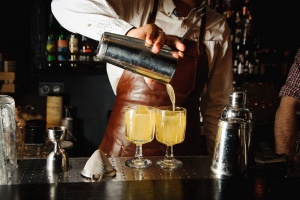 Mexicali, B.C.- With the purpose of regulating the sale and excessive consumption of alcohol, as well as promoting a responsible consumption culture, the State Congress of Baja California unanimously approved the 86th opinion of the Commission of Governance, Legislation, and Constitutional Points, which contains the initiative to reform the Law for the Sale of Storage and Public Consumption of Alcoholic Beverages, presented by Assemblymember José Félix Arango Pérez.

The document endorsed by this Sovereignty prohibits the dissemination of offers, promotions and commercial strategies that encourage the immoderate consumption of beverages with a certain degree of alcohol.

It also establishes as an obligation for permit holders and managers of establishments that prices are not fixed in promotions that encourage the population to consume immoderately alcohol, and preventively prevent family violence, social, economic problems, accidents caused by drivers in a state of intoxication, among others.

The proposal that reforms the article 7 and the article 18 of the Law of Public Consumption of Alcoholic Beverages proposes an Annual Monitoring Plan (PAV) so that regarding the commercialization of alcoholic beverages to the public for direct consumption in the establishments or turns authorized, no costs are established that encourage the population to immoderate consumption of these products.

Said plan will be proposed and regulated by the Municipal Consultative Council, where the conceptual framework of the local Constitution is respected, so that authorities in the matter and in the scope of their competence, give the attention and continuity to the PAV. As a reference to this measure, according to the statistical panorama in Mexico, traffic accidents continue to be among the ten leading causes of death.

In the municipalities of Baja California in the year 2017, there were a total of 19,025 traffic accidents in the State, the municipalities of Tijuana and Ensenada accounted for 80 percent of them, where a large percentage of these drivers were detected, they presented or involved alcohol presence.

At the national level alcohol is commonly present in traffic accidents, during 2016 it was reported that in 7 percent of all traffic accidents the responsible driver had alcoholic breath, 10 percent of the 1,831 autopsies performed on deceased people in transit were tested positive for alcohol. Therefore, the importance of the approval of this regulation, which will provide greater guarantees in terms of health, safety, and prevention for Baja Californians.