Gustavo Sánchez Vázquez, had his last State of the City Address 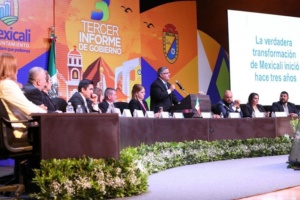 The municipal president of Mexicali, Gustavo Sánchez Vázquez presented on Tuesday, August 6th, his third and last State of the City Address, for the XXII City Council of Mexicali, in the Concert Hall of the Centro Estatal de las Artes (CEART) School of Music, and thus concluding, his period as city mayor, from 2016 to 2019.

In addition to the members of the council, there was the presence of the state governor, Francisco Arturo Vega De la Madrid; as well as former mayors, directors of civil organizations, business chambers, and the consul of Mexico in Caléxico, as special guests.

The mayor began the ceremony, summoning the city council members to express their reflections and observations, about the scope that was achieved, the remaining slopes, as well as the areas of opportunity for the coming administration to continue working, and carry on the good management of finances that the municipality has had in these last three years.

Likewise, Sánchez Vázquez, in addition to highlighting the works that were maintained in terms of urban infrastructure, health and public safety, and job creation; he stressed the importance of citizen participation, and the closeness of government with the community, which has allowed the needs of society to be met in a timely manner, and which it hopes will remain so, in the next mayorship.

Finally, he affectionately said goodbye to all Mexicali citizens, who showed their support during his administration, emphasizing the value of his contribution, reason why Mexicali is now considered one of the cities with the best quality of life in Mexico.

After 34 months of work, the XXII city council of Mexicali will close its functions on September 30.