Breaking News
Home / POLITICS / Gustavo Sánchez, Mexicali Elected Mayor, —I didn’t come to play. My party knows it. Citizens know it. I wanna do what has to be done. It’s been enough!—

Gustavo Sánchez, Mexicali Elected Mayor, —I didn’t come to play. My party knows it. Citizens know it. I wanna do what has to be done. It’s been enough!— 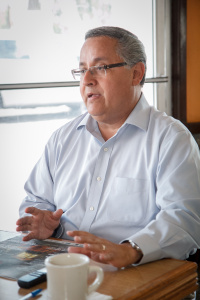 In an exclusive interview with Gustavo Sanchez, elected city mayor of Mexicali in the last elections of June 5th, conducted by Beyond Borders Gazette, we had the chance to know a little more about him than his campaign speech.

For those who don’t know him, Gustavo Sanchez’s profession is tax lawyer and National Action Party member since he was 17. In the interview, with a fresh look, he shared with us that he was very happy and satisfied with the result obtained in the last election, and he felt very grateful after 51 days of hard work in campaign during which he took the time to listen, attend and greet hand by hand an exact total of 26,720 people, number written by his assistant, after the work accomplished in 15 hours work days.

Gustavo said he has the conviction the best campaign of his government to increase the vote in the next election will be giving results.

Born in Mexicali, son of a ‘Cachanilla’ couple, and graduated from the UABC law school in Mexicali, he completed his postgraduate studies in tax matters in Guadalajara. 30 years ago he founded a company that is dedicated to giving advice on legal-tax matters, starting his office services at his own at the age of 24. Today the firm has offices in Mexicali, Tijuana and La Paz, employing about 27 people.

In his personal life, he believes that the biggest challenge was to bring up his children and see them become accomplished men. Today, both have a college education, his eldest son received a law degree, and his youngest child is ongoing in the same race.

Knowing the precarious financial situation in which he would receive the city, far from becoming a disincentive, it caused him the opposite effect, “Knowing how complicated everything is becomes a motivation; it is a challenge. It’s like when you go climbing a mountain, you know it is inclined, you know you have to double your efforts or triple them to climb it, but that doesn’t make you give up on attempting climbing it. “

Gustavo considered himself a man of challenges, so his plan is to start leveling the city’s finances, leveling the income with the spending, and debt to investment, “we have to increase our income,” he said.

To combat poverty in the most marginalized areas of the city, which he had the opportunity to visit in his campaign, some to which he had never gone in his life, where there are terrible shortcomings, and where there is a disturbing breakdown of the social fabric.

“We have about 154,000 abandoned houses, according to the last census. We plan to rehabilitate abandoned houses working together with the local office of social development to create green areas and supportive programs against drugs as D.A.R.E. We must promote social programs for children and adolescents to keep them away from falling into drugs because drugs are the root of many social problems. “

He invited citizens to get involved as there are many cases in which they can work as citizens. “The day we understand that the force is in us things will change, because there are those who blame the government for everything, but never do anything for their community, their city or even their home.

In urban planning, the first projects to develop in the city will be:

All services and paperwork required by the city will be made available online to the public. Providing citizen paperwork they need to complete with local government online, thus avoiding wasting time in queues and turns. You request it online and pay it online.

He said the payroll will be made up of citizens with experience, PAN members or not, with abilities, experience, common sense and humility.

He also stated: “My council will be measured in two issues, first: security. We’ll be able to reflect combat crime levels, that are measurable, and the second issue: employment. We need to focus on economic matters.

We have to go out and tell the world that Mexicali is the capital of … And that’s where I get to another point. We have to get rid of the fear of deciding what the vocation of Mexicali will be. And I will summon the entrepreneurs, the CCE to DESC, chambers of commerce, we have to decide which way to go, now!”

He said it was necessary to redefine and update the criminal map, because once you do that, you generate a prompt police approach, the police who’s ready to answer the call of help can do it in less time. Prompt and effective response, with equipment, with technology in patrols, GPS’s, and video recordings.

With regard to his commitment as the next mayor of Mexicali, he said: “It was not a call. It was the sense of responsibility that came circumstantially. The only two times I’ve agreed to go after public office has been for more than “a call”, for a circumstance of special conjunction, and today in this particular case, I saw that there was an important conjunction, to go work for Mexicali. “

He said that at the end of the road, 36 months from now, all he aspires to is hearing an inner voice that would tell him: Gustavo, you did the right thing!

Inspired by the teachings his father left him, who died 10 years ago, he said: “He always told me: “The man who does what he can, does what he must do.” If it was in your power doing it and you tried, you did what you should’ve done, and if I could make this effort, run this difficult campaign… they attacked me, offended me, gave false testimony against me, a lot of things that I knew could happen, but if I could make the effort despite that, knowing that it could happen, I said I’m going to do it, because I could do it. Since whoever does what he can, does what he should do.”

Gustavo never saw himself as Mayor of his city when he first began as member of the PAN party, he only sought to support democracy back then. However, the circumstances brought him to this point, and feeling a sense of responsibility that came to life circumstantially, he decided to take the challenge of fighting to come and be the person who always does what he can for Mexicali, because that’s what he must do.

“We’ll work together with the United States. We are in an enviable geographical area which has not been taken advantage of as it should, we are neighbors of the most powerful US state, California, and there are cities in Mexico that would kill to have the geographical position we have in Mexicali. I ‘m going to work hard to achieve a close relationship. As a matter of fact, yesterday I was with the mayor of the city of Calexico, there is so much to do! And there is no time to waste!

I didn’t come to play. My party knows it. The citizens know it. I wanna do what has to be done. It’s been enough!”