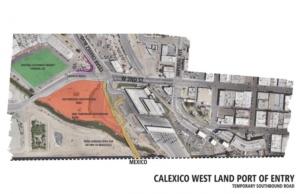 What: GSA and CBP are rerouting southbound vehicle lanes at the Calexico West LPOE for one year.  Where: Calexico West LPOE, just south of the intersection of West Second Street and Cesar Chavez Boulevard, Calexico, CA, 92231.