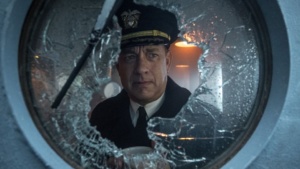 The Academy of Motion Picture Arts and Sciences recommends Greyhound as a movie to watch and enjoy.

Tom Hanks adapted the screenplay, produced and stars in the story of US Navy Commander Ernest Krause, assigned to lead an Allied convoy across the Atlantic during World War II.

His convoy, however, is pursued by German U-boats. Although this is Krause’s first war-time mission, he finds himself embroiled in what would come to be known as the longest, largest, and most complex naval battle in history: The Battle of the Atlantic.

Greyhound is a 2020 American war film directed by Aaron Schneider and starring Tom Hanks, who also wrote the screenplay.

The film is based on the 1955 novel The Good Shepherd by C. S. Forester and also stars Stephen Graham, Rob Morgan, and Elisabeth Shue. The plot follows a US Navy Commander on his first war-time assignment in command of a multi-national escort group defending a merchant ship convoy under attack by submarines in early-1942 during the Battle of the Atlantic, only months after the U.S. officially entered World War II.

Greyhound was initially scheduled to be theatrically released in the United States on June 12, 2020, by Sony Pictures, but was delayed due to the COVID-19 pandemic. The distribution rights were then sold to Apple TV+, which released the film digitally on July 10, 2020. It received generally positive reviews from critics, who highlighted the effective use of the 90-minute runtime.