Grand Jury to Investigate Issues Related to the Auditor-Controller Performance 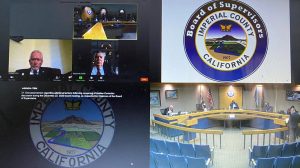 The Imperial County Board of Supervisors voted to have a Grand Jury investigation to look at the situation at the Auditor-Controller Office.

The board met in the first meeting of the year. Their first order of business was to elect Supervisor District 3 Michael Kelley as the new Chairman of the Board and Jesus Eduardo Escobar was selected as Vice-Chairman.

Supervisor District 2 Luis Plancarte asked for this item to be put on the agenda so that the board could take action on what is happening at the Auditor-Controller’s office. The board gave direction to send this to the Grand Jury to investigate Josue Mercado.

Chairman Michael Kelley asked if the sheriff’s department has investigated or pressed charges. County Council Adam Crook said that the sheriff is investigating a matter that will be sent to the District Attorney’s Office. Crook didn’t specify what it was since it is an ongoing investigation.

Supervisor Ray Castillo asked if Mercado had talked to CEO Tony Rohoutas regarding this matter. Rohoutas said Mercado answer an e-mail regarding another issue but has not approached him to talk about this issue.

County Administration received whistleblower complaints alleging that Auditor-Controller, Josue G. Mercado has failed to respond to inquiries and request for information from S&P Global Ratings concerning the County fiscal policies and procedures, resulting in a pending lowering rating of the County-issued certificates of participation, series from “A” to “BBB+”, and failed to file the County’s 2020-2021 adopted budget with the State Controller’s Office by the December 1st deadline.

In determining the validity of the first complaint, County Administration found that representatives from S&P had made numerous attempts to contact Mercado to request information to assist in establishing a rating for the County. Specifically, S&P requested County fiscal policies and procedures, as well as County budget and audit information. Despite the importance of these requests, it does not appear that Mercado responded to representatives of S&P Global with the requested information. Additionally, County staff said, Mercado made any attempt to notify other County departments that could assist with responding to S&P’s request for information. In their notice to the county concerning the pending lowering of the rating of the county grade, S&P identified that one of the primary factors leading to the rating change was the lack of financial information provided by the county.

Failure to file the County’s adopted budget with the State Controller’s Office, as mandated by State law, could have potentially negative consequences, including but not limited to the issuance of a $1,000 fine against the County. The state budget was already sent to the state due to an extension given by the State of California.

Mercado is an elected official who was elected to the Auditor-Controller position in 2018. As an elected, he can only be removed if he resigned or there is a recall.