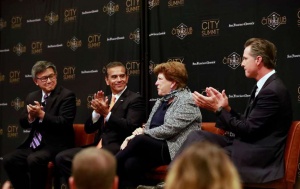 Pacheco served as Lieutenant Governor of California under Newton Booth until Booth was elected to the United States Senate in 1875. Pacheco then served as governor from February 27, 1875, to December 9, 1875, when William Irwin, winner in the September elections that year, was inaugurated.

As a Mexican descent, Pacheco is role model for Latino candidates in California that serve in local, state and federal positions. So it’s very surprising that 143 years after Pacheco’s governorship we still don’t have a Hispanic Governor in California. Cruz Bustamante was a Lt. Governor from 1999 to 2007 and served under Gray Davis and Arnold Schwarzenegger. That’s the highest a Latino has served in California. Antonio Villaraigosa, a former Mayor of Los Angeles with an extensive legislative career, fails to get to the run-off election in November against Gavin Newsom. Republican John Cox will be going against Newsom giving Republicans hope to regain the governorship of the State.

Various media and political pundits argue that Villaraigosa’s campaign collapsed because it didn’t have the resources to defeat the political machine that Newsom has behind him. Others believe that President Donald Trump endorsing Cox gave him the boost he needed to unite Republicans instead of his Republican opponent, Travis Allen.

California has been dominated by Democrats for many years, giving them majorities in both the Assembly and State Senate. Governor Jerry Brown has virtually no opposition in the legislature since his party supports him. In 2016, two Democrats ran for U.S. Senate leaving the Republicans without a voice. This year it will be two Democrats, Diane Feinstein and Kevin De Leon, who will compete in the November election. Once again, the Republican option is out.

Having one party ruling means one party ideology imposed, which can be bad for democracy. Governor Brown signed a law making California a Sanctuary state that would prevent all state and local police forces from questioning and holding people on immigration violations. The Trump Administration and the Department of Justice sued California saying that it would interfere with immigration enforcement. Some cities and counties in California have officially opposed the Sanctuary state measure like San Diego County, Orange County, Beaumont, Laguna Niguel, and Mission Viejo.

So is having a Sanctuary state too “Leftist” even for a Democrat state like California? The last election showed that it might be the case.

Californians will have a Republican choice that moderates and conservatives can relate to as opposed to the liberal ideas of Gavin Newsom. Moderate, conservative, and independent voters will have an opportunity to choose between two different ideological candidates, something that Californians have been asking for a while ago. Unfortunately, Villaraigosa came out short and his message didn’t resonate with voters. Meanwhile, California will continue to wait to have a Latino Governor for a few more years. New Mexico already had Susana Martinez and Bill Richardson as their Latino governors. There is a missing ingredient in California, hopefully, we don’t have to wait another 143 years to figure it out.