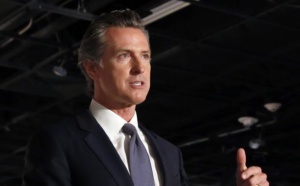 After a week of engagement with civic leaders and law enforcement in the wake of the killing of George Floyd and demonstrations nationwide, Governor Newsom announced his support for new policing and criminal justice reforms. Governor Newsom will work toward a statewide standard for policing peaceful protests and ending the carotid hold that is used by police. This announcement follows the work California did last year to enact the nation’s strongest standard for police use of deadly force.

“We have a unique and special responsibility here in California to meet this historic moment head-on,” said Governor Newsom. “We will not sit back passively as a state. I am proud that California has advanced a new conversation about broader criminal justice reform, but we have an extraordinary amount of work left to do to manifest a cultural change and a deeper understanding of what it is that we’re working to advance. We will continue to lead in a direction that does justice to the message heard all across this state and nation.”

Governor Newsom called for the creation of new standards for crowd control and the use of force in protests. Governor Newsom committed to working with the Legislature, including the California Legislative Black Caucus, the California Latino Legislative Caucus, and other legislative leaders, in consultation with national experts, community leaders, law enforcement and journalists to develop those standards – much like the collaboration that produced AB 392 last year, California’s nation-leading use-of-force bill.

Additionally, he called for the end of the carotid hold and other like techniques in California, directing that the carotid hold be removed from the state police training program and state training materials. He committed to working with the Legislature on a statewide ban that would apply to all police forces across the state.

Criminal justice reform has been a key priority of Governor Newsom’s first year in office. He placed a moratorium on the death penalty, citing racial and economic disparities in how it was applied. He proposed to close the Division of Juvenile Justice and proposed closing two state prisons. In his May Revision budget, Governor Newsom proposed expanding opportunities for rehabilitation and shortening prison time for offenders participating in treatment programs, in education programs, and otherwise engaging in good behavior; as well as increasing access to higher education for young people who are incarcerated.

Governor Newsom acknowledged that more action is needed, and stated that additional reforms around police practices, educational equity, economic justice, health equity, and more must be addressed with urgency.