Breaking News
Home / BUSINESS / GOVERNOR FRANCISCO VEGA RECEIVES SUPPORT FROM THE PRESIDENT OF THE REPUBLIC TO WORK FOR THE BENEFIT OF B.C.

GOVERNOR FRANCISCO VEGA RECEIVES SUPPORT FROM THE PRESIDENT OF THE REPUBLIC TO WORK FOR THE BENEFIT OF B.C. 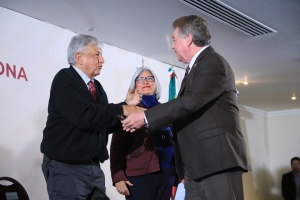 TIJUANA, B.C.- Sunday, January 6, 2019.- The Governor of the State of Baja California, Francisco Vega de Lamadrid, received the backing and support of the President of the Republic, Andrés Manuel López Obrador, to work jointly with the Federation and State for the benefit of Baja California society and thus generate greater opportunities for development, the above occurred within the framework of the Presentation of the “Free Zone of the Northern Border” Program, promoted by the Federation, which aims to activate the productive potential by encouraging the attraction of national and foreign investment to create more and better jobs in the country.

Vega de Lamadrid, on behalf of the Baja Californians, welcomed the President on his first visit to this entity as President of the Nation, and expressed that the free zone program will promote development based on the diverse characteristics of the regions that make up its scheme; in this regard, he mentioned that the differential and equitable treatment towards the northern border has been a demand of a region that competes with the world’s main economy.

He stressed that economic and social development is the result of the culture of the effort of the Baja California society and the collaboration between the government; hence, Baja California captures almost 7 million dollars a day in domestic and foreign investment, only below Mexico City and the State of Mexico; according to data from INEGI, during this state administration the local economy grew on average at a rate of 3.8% above the national average 2.5%, this meaning the first place on the northern border.

Governor Kiko Vega said that the labor policy of this entity promotes the welfare of workers, the consolidation of companies and regional development and that according to data from the IMSS in this state Administration, 241,641 formal jobs have been created.

He added that  Baja California is strongly committed to education as the main driver of development, which is why more than half of the state budget is invested in this area, based on that, he said that since the beginning of the current State Administration he has requested the Federal Government that Baja California is taken to the national average of the percentage that other states receive for educational investment, the foregoing with the purpose of having greater resources to support the economic and social growth of the state.

“Your program is going to strengthen even more the dynamics and the strategies in economic matter to benefit the residents of Baja California, we have the busiest border in the world, therefore it is important to speed up the border crossings; we welcome your wish, Mr. President, to review the progress of this decree each quarter and, if necessary, reorient the strategies, according to the needs of each region and according to its socio-economic vocation “, he concluded.

The President of the Republic, Andrés Manuel López Obrador, said that the “Free Zone of the Northern Border” program is part of the National Development Plan promoted by the Federal Government that leads to raise the economic potential of Mexico and thus improve the quality of life.

In this regard, he stated that it is estimated that, with the implementation of this program, which includes the VAT reduction from 16% to 8% and from the ISR to 20%, no more than 50 billion pesos will be collected, but in the medium and long-term the growth of the Border Zone will be increased and this will mean income, work, welfare and more collection for the Public Treasury.

López Obrador pledged to come back to the entity in 3 months to carry out an evaluation involving the public and private sectors in order to follow up on the first results of this program that began in Tamaulipas and has been implemented throughout the border strip.

On the other hand, the Secretary of Economy, Graciela Márquez Colín, highlighted the productive potential of the localities of the northern border of the country because they have attractions for national and foreign investment; being the geographical location one of the most important, providing advantages for the commercial and economic flow that should be exploited for the creation of a development curtain that has as objective the Free Zone program.

He also highlighted the importance of Baja California for the national economy due to its location, as well as being a geographical point of trade with the United States, the strongest economy in the world; it is also an important point of connection with the Asian continent whose countries are the engine of the world economy.

During this formal ceremony present were the Prosecutor of the SHCP, Carlos Romero Aranda; the Responsible of the Fiscal Stimulus Program of the Border Strip, Pedro Romero Torres-Torija; the National President of Concanaco-Servytur, José Manuel López Campos; as well as representatives of the three orders of government and business organizations.