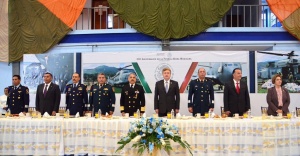 ENSENADA, BC- Saturday, February 10, 2018.- The Governor of the State of Baja California, Francisco Vega de Lamadrid, participated in the act alluding the commemoration of the one hundred  third anniversary of the Mexican Air Force, which also gathered civil authorities and military.

The state governor acknowledged the work undertaken by men and women to safeguard the airspace of the national territory, in addition to the noble actions undertaken in support of the population.

In the hangar of the Military Air Base Number 3, the Governor Francisco Vega toured an exhibition in which he details the equipment, material and type of airplanes and helicopters with which the soldiers of the airforce in the entity count.