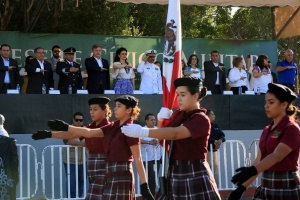 Due to the celebration for the Independence Day in Mexico on the night of Friday, September 15th, the governor of the state of Baja California Francisco Vega De Lamadrid led the ceremony of the Cry of Independence in its 207th Anniversary. The State Governor led the official “Grito de Independencia” ceremony on Friday at 11:00 pm, accompanied by the President of DIF Baja California, Mrs. Brenda Ruacho de Vega, and the head of the Legislative and Judicial Branches, from the balcony of the Executive Building, where the President, together with an emotional crowd of more than 55 thousand people, hailed the heroes who gave us homeland and freedom.

Continuing with the events of the 207th Anniversary of Independence of Mexico, this Saturday morning, September 16, Governor Francisco Vega de Lamadrid, accompanied by the Commander of the Second Military Region, General Adolfo Domínguez Martínez and the Vice Admiral General Corps DEM, Mario Maqueda Mendoza, led the protocol ceremony of honors to the flag, soon to witness the civic military parade.

The parade was attended by contingents integrated by various institutions and schools, by approximately 1,775 elements composed by the Armed Forces, Federal, State and Municipal security institutions; as well as educational and civil associations; seven bands of war intervened; 20 equestrian binomials; 79 military vehicles and highlighted the sample of skills of the Military Air Force composed of three aircraft.

Elements of civilian groups, agents of police corporations and elements of rescue groups paraded. The report includes the participation of educational contingents made up of 15 public and private middle schools and higher education institutions, such as CECYTE, COBACH, Frontera College and David Alfaro Siqueiros, to give a total of 1,166 students as 3 sports groups.