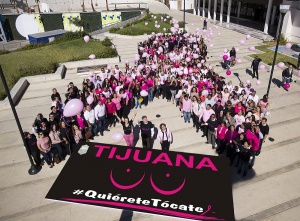 TIJUANA, BC.- Women are undoubtedly the most important part of society and their contribution is irreplaceable in all areas of life, which is why those conditions that directly affect them are of everyone’s concern; and a priority for the government, said the Governor of the State, Francisco “Kiko” Vega de Lamadrid, leading the health day #QuiéreteTócate” (love yourself touch yourself), which was simultaneously held in Mexicali, Tecate and Playas de Rosarito and Saturday in Ensenada; which was addressed to the staff of the Executive Power, as part of the activities of the World Day of the Fight against Breast Cancer, commemorated this past October 19.

During his message, the state government reported that breast cancer has become the leading cause of death, particularly in women between 50 and 69 years of age, which threatens life and health. He also stressed that the female population in Baja California is 1.6 million so all campaigns and actions of prevention and health care for women are aimed at addressing the risks and damages caused by this disease.

Therefore, the Chief Executive mentioned that campaigns like # QuiéreteTócate which aim to promote the timely detection of breast cancer; add public, private and social efforts in Baja California, aimed at the prevention and awareness of women and men.

In this regard, he announced that in 2017 records at the Secretary of Health indicated there were 215 deaths and 599 new cases were detected; while in the first eight months of 2018, 115 deaths and 318 new cases have been reported. The above is a sign that the efforts between society and government are bearing fruit to achieve the goal that in Baja California there are no deaths from this cause.

Vega de Lamadrid acknowledged the work done by government agencies such as the Secretary of Health and the ISSSTECALI, as well as DIF Baja California, chaired by his wife, Mrs. Brenda Ruacho de Vega in the prevention and awareness of breast cancer in the communities.

For its part, the Senior Officer, Loreto Quintero Quintero, pointed out that in addition to the 599 cases detected by the Secretary of Health, in ISSSTECALI 107 new cases were detected and 228 people are being treated.

For this reason, the conference aims to detect and timely address breast cancer, therefore, efforts have been focused on creating awareness among women and men, and generate a new culture that is distinguished by self-care, responsibility and solidarity.

The President of DIF Baja California, Mrs. Brenda Ruacho de Vega invited to leave aside the taboo that exists on self-examination and medical review since these simple procedures can save the lives of thousands of women and men with timely detection. That is why she exhorted women to perform this procedure and to communicate to 01 800 2CANCER to schedule a free mammogram at the nearest health center.

As part of this event, the President of the Association United Women Integrating a Better World (MUIMM), Alma Genoveva Medina Gastélum; the President of the Association of Innovative Women’s Army (EMUJEIN), Teresa Márquez; the Director of Social Medical Services of Pro Oncavi, Karina Barragán Chávez; as well as public officials and representatives of Nonprofit Organizations.