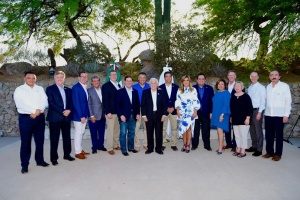 PHOENIX, Arizona.- On Sunday May 6th, the Governor of Baja California, Francisco Vega de Lamadrid, participated in the second annual summit between Governors of the United States, Mexico and Premiers of Canada, where topics were discussed for the benefit of the North American region and the opportunities for development among the three countries.

In this meeting, where Mexico participates in the co-organization through the National Conference of Governors (CONAGO), along with the National Association of Governors of the United States and the Premiers of Canada, common issues among the 3 countries, corresponding to infrastructure, were addressed besides labor mobilization, modernization, economic development and development opportunities in the regions.

From this summit, the state governor established that there are investment opportunities in Baja California in various economic sectors and it is one of the states in the north of the country with more development in infrastructure and job creation.

As part of the work agenda, Governor Vega de Lamadrid held a meeting with his counterpart from the State of Utah, Gary Richard Herbert, with whom he established infrastructure issues such as the Ojos Negros airport project, the El Sauzal port and the railroad, which is intended to be binational; and which have been presented in advance by the Governor and the Secretary of Economic Development (SEDECO), for which it was established that it was a follow-up meeting to the projects and the topics that are held with said State.

In turn, it was reported that a next work meeting was planned in the State of Nevada with the Governor, Brian Sandoval, and then a visit to Utah in a meeting between Governors, for which Vega de Lamadrid invited Governor Gary R. Herbert to visit Baja California, so in future dates the Governor of the State of Utah will be received in our entity.

To this meeting accompanying the Governor Vega de Lamadrid were the Secretary of Economic Development, Carlo Bonfante Olache; and the representative of the Government of the State of Baja California before CONAGO, Andrés Tapia Leyva.