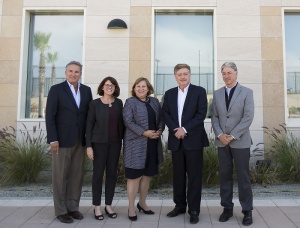 TIJUANA, BC- Monday, April 22, 2019.- The Governor of the State, Francisco Vega de Lamadrid and U.S. Consul General in Tijuana, Sue Saarnio, held a working meeting on Monday, in which both authorities ratified the commitment to work together in the follow-up to the topics of binational interest, which are fundamental in this dynamic border region in which trade and business exchange is a constant to underpin economic development and competitiveness between Mexico and the United States.

During the meeting held at the offices of the United States Consulate General in Tijuana, the state and diplomatic officials reviewed issues related to economic development and border security, particularly with regard to the current delay in the crossings of exports of goods in the Otay Port in Tijuana, which went from an average of two hours of waiting time to eight hours, this before the reduction of the access lanes, which affects the productivity of the companies.

In this context, it was announced that the Government of Baja California has maintained contact with business organizations and associations in the city, thus forming an integrated front for the state, municipal, chambers and business associations that work in organizing and streamlining the flow on the Mexican side; at the same time, the head of the state had direct contact with the Secretary of Foreign Affairs of Mexico, Marcelo Ebrard Casaubón, to express this situation to him, which is currently being dealt with by local authorities and diplomatic representation.

In this meeting, which was attended by the Consul for Political and Economic Affairs, Bridget Preemont; the Secretary of Economic Development of the State, Carlo Bonfante Olache and the President of the Business Coordinating Council of Tijuana, Gabriel Camarena Salinas, reiterated the importance of reinforcing coordination between the agencies on both sides of the border.