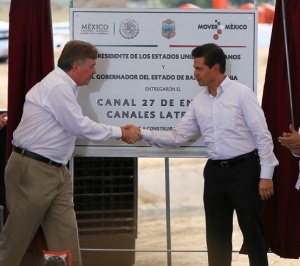 On Monday, Channel 27 de Enero and lateral channels which work for the irrigation system in this northern region of Mexico were delivered, the Baja California State Governor Francisco Vega de Lamadrid and the President of the Mexican Republic, Enrique Peña Nieto, highlighted that it is the work of greater investment in matters of hydraulic infrastructure in Baja California.

The President of the Republic stressed that “it is an unprecedented investment, with 2,886 million pesos invested in the recovery of this Canal that had deteriorated, in what are its 32 kilometers in the central channel, and in more than 270 kilometers of lateral channels, which is the whole of this work that we are inaugurating today.”

The President detailed that in the entity 4 thousand 200 million pesos have been invested only in hydraulic infrastructure. He exemplified that other works are underway, such as “the Ensenada desalination plant, which will be completed by the end of this year, or the channeling of the Alamar stream in Tijuana, just to mention some of them.”

He stressed that the Mexicali Valley is the third among the three most important valleys in the country with 200 thousand hectares of producers and 17 thousand users “who contribute very decisively to this important economic activity, which not only generates jobs, but also supports food production for the country itself and much of what we take from Mexico to different consumption tables in other parts of the world.”

Likewise, over his speech, President of Mexico highlighted how the relationship with the new US government is going, and said that he has continued to work with the United States government, pursuing and seeking mutual respect to generate trust and maintain a fluid dialogue, that allows covering uncommon subjects, such as: security, immigration and commerce. “We are effectively open to renegotiate a free trade agreement as of August 16.

An agreement must provide the three participating partners very favorable and positive conditions, which benefit the three countries that integrate this agreement, and we are going to renegotiate it because there are indeed areas of opportunity in an agreement that has more than 20 years, and that today can be incorporated from the updating and modernization we have had in our legislature, but I am optimistic, I think we are on the road to be able to work it out, like I said, in mutual respect, in a frank dialogue, an open and sincere dialogue, and above all, looking for a shared benefit.”

He also stated that Mexico will be in condition to renegotiate the free trade agreement.