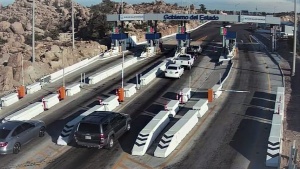 LA RUMOROSA.- With the objective of improving its services, the Government of the State headed by President Francisco Vega de Lamadrid, through the Sentinel Highway Trust – La Rumorosa (FIARUM), began the work of extension of toll booths in the La Rumorosa Highway. This was reported by the General Manager of the state agency, Rodolfo Valdez Gutiérrez, who said that from the second week of October work will begin formally for the construction of the fifth toll booth in the ascending road, for which just over 3.6 million pesos will be invested.

The works will include the access lane on the basis of hydraulic concrete, the extension of the roof and the shed with its different special attachments for its operation, as well as electrical installations, voice and data. In total it will be built in an area of 825.41 square meters.

“We must remember that unlike the descending toll booths, the ascending square has 4 payment booths, which sometimes, when the traffic accumulates during the holidays and peak hours, can cause long lines which makes users uncomfortable, in addition to generating delays in their transfers; these actions aim to have more capacity for attention, in addition to launching other strategies such as the Early Payment System, which has already proven its success, “said Valdez Gutiérrez.