GINA CRUZ MEETS WITH PROFESSIONISTS AND INDUSTRIALS OF TIJUANA 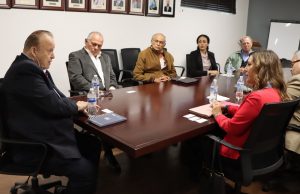 The senator for Baja California, Gina Andrea Cruz Blackledge, will work in a coordinated and periodic manner with professionals and industrialists from Tijuana to promote the development of this region, in the face of measures such as reforms to the electricity law and tax provisions that only discourage investment of new sources of employment.

The also President of the North American Foreign Relations Commission of the Senate, first met with Salvador Díaz and Antonio Ochoa, who expressed their concern about the new tax provisions that will increase taxes.

This causes Mexico to lose competitiveness at the international level since foreign investors will turn to other countries where they give them more advantages or outright take their production processes to other countries.

Gina Cruz also held a meeting with the Association of Industrialists of Otay Mesa, chaired by Luis Armando Padilla Fitch, who observed the deficit of electrical energy that exists in the state, and the electrical reform promoted by the Federal Executive is not going to help solve it and therefore, there will be no energy to offer to companies interested in landing their projects in Tijuana.

The industrialist saw with concern how the federal legislators of the ruling party and their allies, who are the majority in Congress, approve all the initiatives that the Executive sends them, without moving a single comma, which is very worrying since this has caused the exit of companies of the United States and Canada.

Gina Cruz established the commitment to work in a coordinated and periodic way, to generate new reform initiatives as well as the necessary letters, to bring their issues, concerns, and proposals before the highest platform of the country, to contribute to the development of the region and country.