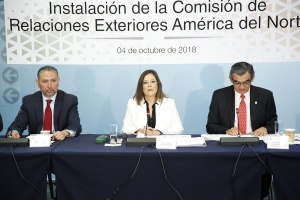 MEXICALI, BAJA CALIFORNIA.- The senator for Baja California, Gina Andrea Cruz Blackledge, installed the North American Foreign Relations Commission, for which she is the president.

At 10:25 hours on Thursday, October 4, the President proceeded to make the formal declaration of the North American Foreign Relations Commission installation, corresponding to the First Year of the Constitutional Exercise of the Sixty-Fourth Legislature of the Honorable Congress of the Union in Mexico.

Gina Cruz thanked those present and announced that she will ask the Senate board for an extension of the US-Mexico-Canada trade agreement, and will frequently call the board for preparation of the commission work plans, and also will ask all members to send their proposals and ideas for the relief of all the tasks to be undertaken.

All the senators present members of the Commission, made use of their voice to express their intent and disposition in performing this commission’s work, in order to contribute in the best possible way to the development of foreign affairs corresponding to the North American region and the achievement of benefits for Mexico.

Ambassador Jacob Prado González, in charge of the office of the Undersecretary of Foreign Affairs for North America, and the Ministry of Foreign Affairs (SRE), highlighted the economic, political, social and cultural importance of the region. He indicated that parliamentary diplomacy is an essential instrument for trilateral consolidating ties through dialogue and communication.