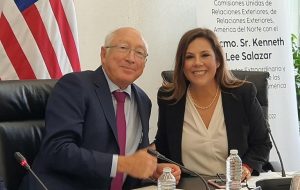 The Senator for Baja California, Gina Cruz Blackledge announced that she has presented an initiative to issue a commemorative coin for the 200 years of relations between Mexico and the United States, this, within the framework of the visit made by the ambassador of that country to the Senate of the Republic, Ken Salazar.

The legislator for National Action stressed that the ambassador’s visit is of great importance for this Senate. Relations between Mexico and the United States of America are, for our countries, the most important, vital, and decisive in every sense.

Gina Cruz highlighted the number of border crossings, international travel, and people living and moving between the two nations speaks volumes about a strong, constructive, and vital relationship.

She mentioned that this meeting takes place in a year of great significance for both countries, for the 200 years of a relationship that, although it has experienced tense and difficult moments, is today that of two sovereign nations whose commercial and diplomatic relations are unique in the world. world, since they go beyond situations and historical changes.

“In this regard, I have presented an Initiative for the creation of a Commemorative Coin of the Two Hundred Years of Diplomatic Relations between our two countries, which I hope will be ruled in the coming weeks.

“Let us remember that our neighborhood and our wide common border present us with important challenges in economic and commercial matters, as well as security, environment, migration, climate change, and energy transition.”

Gina Cruz highlighted the importance of dialogue between officials from both countries on economic and security matters, and that the issues discussed there are of the highest priority for this Senate.

“I hope that these meeting spaces can be more frequent and that, knowing that what unites us is much more than what divides us and that both nations share a geographic space, a regional agenda, rich traditions and cultures, and a future common”.