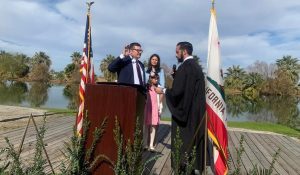 In a special ceremony surrounded by friends and supporters, George Marquez was sworn as the new Imperial County District Attorney by Judge Michael Domenzain.

He replaces Gilbert Otero who spent nearly three decades leading that office. It was a beautiful Saturday morning at the Casa Blanca venue in Holtville and its background was the perfect place to begin a new era in the law.

“This is a victory for the victims. Unfortunately, I saw how the last District Attorney didn’t have a love for his position anymore and wasn’t doing the job he was supposed to do, for those women that are being abused and suffering. Now, there will be someone that will listen to them. That’s why I got involved in this campaign, always thinking about girls who have been raped. That’s why I supported someone with integrity like George Marquez,” Margaret Sauza, Marquez’ biggest supporter during this campaign, said.

“George Marquez is someone with honesty and integrity and had the perfect qualities for the position,” Liza Barraza, President of the Imperial County Lawyers Association said. “I think if we work together we can do great things for everyone.”

“I want people to know that they will have a hard-working and transparent District Attorney. As time goes on, we will outreach to the community so they know what we are doing. Especially the Spanish-speaking community,” Marquez added.

As stated by Marquez in a previous interview with Beyond Borders Gazette, the initial plan is to have a meeting with the entire office and let them know what the expectations are.

“I’m going to be a person that expects people to do their job but I’m going to be fair, I want a good working culture and will do an assessment of the office and review all the serious cases, specifically the homicide cases and make sure they are assigned to someone that can do the job and be prosecuted the way it should be,” he said.

Marquez was endorsed by all the peace officers’ organizations in the Valley. He will reach out to the law enforcement community and have meetings to make sure they are all on the same page.

“I’m with them and we will work together in prosecuting cases and holding criminals accountable,” said Marquez. In addition, he wants to create a liaison program to make sure people have a contact person within the office and speak about any issues they may have, and will start recruiting more attorneys.

Marquez is an attorney from Imperial Valley that has the respect of his peers and the community as a whole because of his character and humble personality that brings people confidence. With the perfect professional experience as a prosecutor and a public defender, he now has a unique perspective of the law.

During his tenure as a Deputy District Attorney, he prosecuted many different types of cases, including serious violent crimes, and gang cases, and was also the juvenile prosecutor for approximately four years. As a prosecutor, he conducted jury trials, grand juries, preliminary hearings, and jurisdiction hearings, among others.

Since 2013 he has been an adjunct professor of criminal justice. He lectured at the University of Phoenix from 2013 to 2018.  In the Fall of 2018, he started lecturing at San Diego State University, Imperial Valley Campus, as a part-time criminal justice lecturer. Marquez has lectured a combination of approximately 32 classes. Many of his students have pursued successful careers in law enforcement.