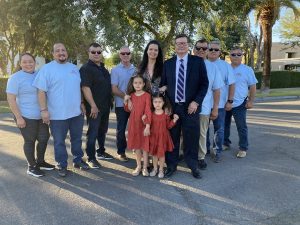 With the promise to build a bridge between the community and the criminal justice system, Attorney George Marquez announced his candidacy for Imperial County District Attorney on Dec. 3rd.

Having the west side of the Imperial County Superior Court House as background, Marquez announced his intention to run for the position the incumbent, Gilbert Otero, has held since 1994. There are rumors that El Centro City Councilman Edgard Garcia will once again challenge Otero as he did four years ago but it hasn’t been confirmed. The election will take place in June 2022.

“I believe law and order works. I believe in fundamental fairness. Justice requires us to look for answers. To progress, not regress. To keep an open mind and look for better solutions to things that are not working,” Marquez said in his opening remarks.

Marquez worked as a Deputy District Attorney for nine years and currently works at the Public Defender’s Office. As the youngest of 9 children, his father worked two jobs: Mariachi and carpenter. His parents fell in love with what the Imperial Valley had to offer.

Marquez said the District Attorney’s Office can not face this alone and the community will have to come together to find solutions.

“Listening to everyone including those that are vulnerable and that includes the children and the elderly. And the most marginalized people who live in our community who live in the darkest corners of the county, you will have a D.A. that will shine a light on you,” he said.

Marquez plans to focus on juvenile justice and start a program in which the juvenile meets with the victim with a mediator and talk. That is a program that Marquez said has worked in other areas and it helps keep the community safe.

He also plans to create a community group made of people of different walks of life so he can hear and learn what are the needs of the valley.