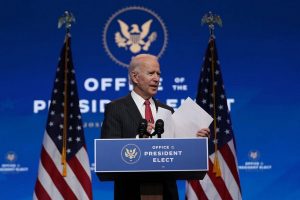 After weeks of delay, the head of the General Services Administration informed President-elect Joe Biden on Monday that the official governmental transition process has been approved.

GSA Administrator Emily Murphy said in a letter that Biden, whom she referred to as “the apparent president-elect,” is now able to get access to millions of dollars in federal funds and other resources to begin his transition to power. In her letter, Murphy also denied that she had been under pressure from the White House to delay the process.

President Donald Trump has yet to concede the 2020 election.

“Please know that I came to my decision independently, based on the law and available facts,” Murphy said in a letter to Biden. “I was never directly or indirectly pressured by any Executive Branch official—including those who work at the White House or GSA—with regard to the substance or timing of my decision.  To be clear, I did not receive any direction to delay my determination.”

President Trump thanked Murphy for her handling of the ascertainment process since Election Day. The president pledged to continue his legal challenge of election results.

“I want to thank Emily Murphy at GSA for her steadfast dedication and loyalty to our Country,” Trump wrote on Twitter. “She has been harassed, threatened, and abused – and I do not want to see this happen to her, her family, or employees of GSA. Our case STRONGLY continues, we will keep up the good fight, and I believe we will prevail!”

Joe Biden, the Democratic presidential candidate for the election, was declared the president-elect by the media on November 7, 2020, prior to any state elections being certified. International media subsequently reported the same prediction, and over the next 24 hours, world leaders congratulated Biden and Vice President-elect Kamala Harris on their election.

The GSA Administrator, Emily Murphy, a Trump appointee, refused to issue the “ascertainment” letter declaring Biden the “apparent winner”, on the basis that the election result was disputed. Biden had also been denied daily classified national security briefings.

The Pre-Election Presidential Transition Act of 2010 requires the General Services Administration (GSA) to provide potential presidential transition teams with office space, facilities, funding for transition staff, and access to government services. For example, spending on Mitt Romney’s transition team in 2012 was going to be $8.9 million, all funds appropriated by the U.S. government.