From working in the fields to becoming a Judge 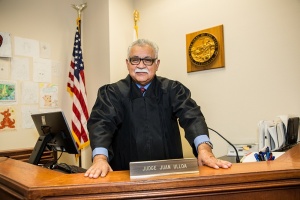 Juan Ulloa is a prominent judge serving at the Imperial County Superior Court of California, Growing up the seventh of 10 children of farm worker parents, from an early age, Judge Juan Ulloa has a vision and passion to serve others, reason that took him to pursue a law degree.

As judge, Juan Ulloa has a purpose: help others, and that’s what has kept him working for the Imperial County community since 1994.

In an exclusive interview with Beyond Borders Gazette he told us a little bit about his story and some reasons why he received the Benjamin Aranda III Access to Justice Award in 2012.

Judge, you have an extensive career in the law and you have worked in favor of immigrants for many years. Even in your college years, you were very involved in the Chicano movement working in favor of Mexican immigrants and the most vulnerable workers. Can you tell us about your career as a judge and what motivated you to pursue this career?

“It was not in my plans to be a lawyer or a judge but I wanted to be a school teacher. However, during my time in college, I got involved with other movements and it inspired me to enter law school. After law school, I worked with Rural California in legal assistance working not only with low-income people but with field workers and labor conditions. Since my parents worked in the fields I learned firsthand the difficulties, the conditions of the workers and it was natural for me to make that change..  Later I was named temporary judge of the juvenile court and then in 1994 I ran for a vacant seat in superior court and I was elected to that position.”

“During our youth, we learned to work in the fields but our mom always told us that we needed to continue in school. I learned from my mom to read books and that helped me a lot in my success in school and started opportunities to help others. At age 12, with my brothers and some other friends we started working in the fields and learned about the work of an adult. We worked in 120-degree weather using the hoe. That’s when I decided that I needed to have a better life than my parents. That’s why when I had difficulties in school I remembered how difficult life would be without an education.”

Beyond Borders is a binational publication that wants to unite the U.S.-Mexico region. You were part of a very ambitious project in the family court. The Imperial County and Baja California Courts are currently collaborating in favor of the families. Please tell us how this project came to be and the positive result from all of this.

“We developed a relationship, the staff of the Mexican Consulate and the court employees that work in the child support area. There are families in Mexico but they have their jobs in the U.S., or vice-versa.  With the help of the Mexican Consulate in Calexico we made a contract with the law school at UABC and the family court in Mexicali. I’m not sure if we are the only ones but we are the first county that has this type of collaboration agreement with a foreign state. I’m very proud to be the first.”

We are in the 20th edition of Beyond Borders Gazette and we have our success story with you. What will be your advice to the young people that are leaving high school and preparing themselves to start their college career to be successful in life?

“Every person needs to have dreams and something that they want to do. My mom said, “Do what you want to do, but it needs to be of service.” It’s important for a young person not to lose a sense of optimism and effort to achieve their goals. It’s easy to give up these days, we don’t seek big dream because of the possibility that we can’t achieve them. If we don’t try we are not going to accomplish anything. I would tell the youth that they need to train their mind, read, listen, talk, share, pay attention to others but also to follow their hearts and get to the place they want to be.”