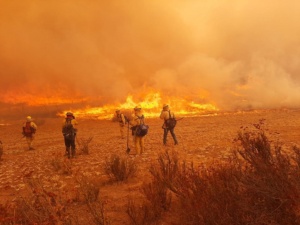 ENSENADA, B.C.- The forest fire registered in “Rancho La Escondida” in Valle de Guadalupe that was attended by municipal, state and federal authorities affected 8, 564 hectares, in addition to the loss of a unit of volunteer firefighters, informed the Secretary of the Field and Food Safety (SCSA), Héctor Haros Encinas.

He specified that SCSA personnel participated in the fight against the fire, in coordination with the State Civil Protection, the National Forestry Commission (CONAFOR), the Secretary of National Defense (SEDENA), the Ensenada Fire Department, Rosarito beaches and Tecate, as well as volunteers and the private sector.

Haros Encinas urged the population of Baja California to avoid throwing cigarette butts, making bonfires, burning garbage, as it is a trigger for forest fires.

In the same way, he invited the producers of the region to keep their properties clean or to draw paths, to prevent the spread of the fire and affect their properties, infrastructure, and animals.

At the moment there are no active fires, however, personnel from the three orders of government and volunteers are active and vigilant of incidents that can be registered, especially in these months, which are the months where the greatest number of forestry fires are registered.

To conclude, Haros Encinas recognized the great effort that the personnel of the different orders of government, fire brigades, and firefighters make to fight the forest fires that have been registered, which are mostly caused by human hands.