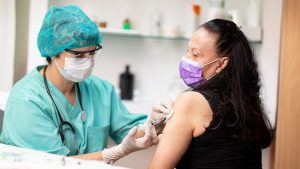 Flu hospitalizations have increased by nearly 30% in a week as the spread of respiratory illnesses remains high across most of the U.S.

More than 11,200 people were hospitalized with the flu during the week ending Nov. 19, compared to about 8,700 patients admitted during the prior week, according to data from the Health and Human Services Department.

For the past several years, CDC has used a mathematical model to estimate the numbers of influenza illnesses, medical visits, hospitalizations, and deaths. The methods used to calculate the estimates have been described previously. CDC uses the estimates of the burden of flu in the population to inform policy and communications related to influenza prevention and control.

Since the emergence of SARS-CoV-2, influenza activity has been lower than observed before the pandemic. Compared with influenza seasons before the pandemic, the 2021–2022 influenza season was mild and occurred in two waves, with a higher number of hospitalizations in the second wave. Influenza activity in the United States during the 2021–2022 season began to increase in November, declined in January 2022, increased again in March 2022, and remained elevated until mid-June 2022.

The season was characterized by two distinct waves and predominately influenza A virus circulation. Overall, influenza A(H3N2) viruses were the most commonly detected influenza viruses this season. The 2021-22 season is described as having low severity; however, the effect of influenza differed by age group, and the severity of the season in some age groups was higher– hospitalization rates among older adults aged ≥65 years old were higher compared with other age groups.

CDC estimates that the burden of illness during the 2021–2022 season was low with an estimated 9 million people sick with flu, 4 million visits to a health care provider for flu, 100,000 hospitalizations for flu, and 5,000 flu deaths. The number of cases of influenza-associated illness, medically attended illnesses, hospitalizations, and deaths were the lowest since the 2011-2012 season which was the first full season following the influenza A(H1N1) pdm09 pandemic. The adoption of mitigation measures intended to prevent the spread of COVID-19 may have also impacted the timing or severity of influenza activity during the 2021-2022 season.