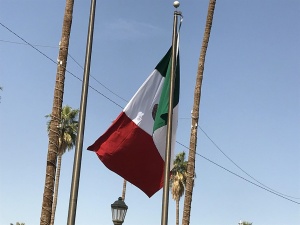 The Mexican Consulate in Calexico held the commemoration of Flag Day in Mexico celebrating the tradition and meaning of its symbol.

On February 25 at the gardens of the Mexican Consulate, a ceremony was held to honor the flag. The flag represents the rich history of a country and the heroes that fought for their independence.

Red, white, and green are the colors of the national army in Mexico. The central emblem is the Mexican coat of arms, based on the Aztec symbol for Tenochtitlan, the center of the Aztec empire. It recalls the legend of an eagle sitting on a cactus while devouring a serpent that signaled the Aztecs where to found their city, Tenochtitlan. A ribbon in the national colors is at the bottom of the coat of arms.