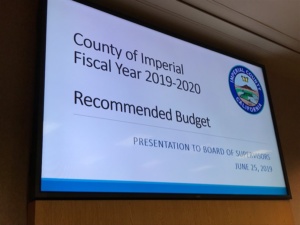 Knowing that the financial solvency of the county will be challenging in the years to come, the Imperial County Board of Supervisors accepted the Fiscal Year 2019-2020 budget at their regular meeting held June 25, 2019.

The board heard the budget presentation and the mission moving forward is clear: to fix the financial situation this year before the situation becomes worse.

The board recently adopted a General Fund budget deficit plan. Since 2016, the county has been using one-time reserves to balance the budget and cover the deficit balance. Resolving these shortfalls and balancing the budget without one-time revenue sources would require a 7% cost reduction for General Fund departments. The three-year deficit mitigation plan calls for temporary use of carry-forward fund balance and other reserves. Additionally, departments will face a cut in their operating expenditures to bridge gaps. The main plan is a stable budget environment with no reliance on one-time resources after the end of the three-year term.

As directed by the board, this budget also proposes 32 General Fund unfunded positions which total $1.7 million in savings.

County Supervisor District 1 Jesus Eduardo Escobar said he was worried about the financial situation of the county and said they need to correct the budget immediately before it goes under.

“The status quo has to lead us to this deficit and we need to do something before we end up with no reserves to cover the deficit,” Supervisor Escobar said.

Supervisor Mike Kelley agreed with Escobar saying that they need to find ways to solve the budget deficit this year.

“We need to discuss this every week and think outside the box to overcome this deficit,” Kelley said and added that the county provides services to all residents of Imperial County. Kelley floated the idea of having the cities contribute to the cost of services they are providing with.

Even with the savings mentioned during the budget presentation, preparing the General Fund’s budget was still challenging to staff due to salary adjustment of one step increase, additional 2.2% salary increase for the bargaining units that have signed a contract and a $2.7 million increase in loss reserve expense. Furthermore, one of the greatest challenges in preparing this budget is the General Fund’s inability to cover ongoing expenditures with sustainable funding sources.

The county is projecting the use fund balance carryover of $10 million as well as one-time revenue of $2.5 million from the revenue stabilization reserve and $2.9 million from the General Fund reserve to cover the shortfall.