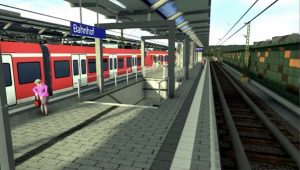 The interurban train, which in its first stage will travel 27.5 kilometers from Otay to Maclovio Rojas to transport more than 40 thousand passengers, could include Ensenada and Valle de Guadalupe in the future, announced Mario Escobedo, Secretary of Sustainable Economy and Tourism (SEST).

This was said by the head of the SEST, during a remote meeting called by the Tijuana Tourism and Convention Committee, led by Carlos Cruz Archundia, where the balance sheets and perspectives of the tourism sector were aired.

“This will be the year of economic reactivation, and we have to do a lot for this tourism sector, which has the full support of the Government of Jaime Bonilla Valdez,” said Mario Escobedo.

Regarding the interurban passenger train project, the state official stressed that the intention is for it to operate on the same freight train track, on a 27.5-kilometer route in nine stations, being able to reach a capacity of up to 60 thousand passengers per day.

He also said that so far an investment of three billion pesos is planned, from the private sector, so this modern passenger transport project does not include charges for the government.

He argued that eventually and with previous binational agreements, the cross-border train could cross into California and, where appropriate, would facilitate the transfer of people between one side of the border and the other, with an estimated time of 45 minutes between the Maclovio Rojas and downtown from San Diego, California.

Among the main benefits, he mentioned that this train would make the circulation of seven thousand cars a day unnecessary, in addition to reducing the generation of thousands of tons of C02 into the atmosphere.

On his occasion, the COTUCO leader said that, in the face of the crisis generated by the new coronavirus pandemic, the sector must continue to work in a coordinated manner, to achieve common objectives.

He highlighted the competitive advantages of Baja California, in comparison with other entities in the country, taking advantage of the support that it has constantly offered from the authorities of the three levels of government.

The meeting was also attended by the SEST Undersecretary of Tourism, Iveth Casillas Rivera, who released important data on hotel occupancy, the influx of visitors, and airport activity in the entity.

He pointed out that, by the Undersecretary in charge of it, 2021 began with actions aimed at responsible reactivation, with promotional campaigns regarding medical tourism, in addition to training projects for visitor care.

Ricardo Vega Montiel, from Baja Health Clúster; Tere Bañuelos, from the Mexican Association of Travel Agencies; Miguel Aguíñiga, from the Volaris airline; Fortino Cabrera, from the Association of Hotels and Motels; and Gilberto Gamiño, from the Baja California Tour Operators Association, among others.